The principal objective of the Central Bank of Lesotho is to achieve and maintain price stability. To attain this goal, the Bank performs a number of functions in accordance with the modern central banking practices. An important function of the Bank is to formulate and execute monetary policy for Lesotho. Other functions include issuing of currency, serving as a banker for the Lesotho Government and the commercial banks, acting as a custodian of the country’s foreign reserves and supervision of financial institutions. It also acts as an advisor to the government on financial issues specifically, and more generally on macro-economic issues.

The primary responsibility of the Central Bank of Lesotho is formulation and implementation of the country’s monetary policy. During 2004, the Monetary Policy Committee (MPC) was established, to replace the Monetary and Exchange Policy Technical Committee (MEPTC) which had been in existence since 1998. The Committee was established upon the realisation of the need to enhance accountability and transparency of the Central Bank of Lesotho in matters related to the formulation of monetary policy in Lesotho. The Committee consists of the Governors, 2 non-executive members of the Board of Directors, one of whom shall be an economist or a person of recognised standing and experience in economics, the Principal Secretary of the Ministry of Finance and Development Planning, and a representative of the business community.

The broad responsibilities of the MPC are to:

One of the main responsibilities of the Central Bank of Lesotho is to ensure the financial strength and stability of the nation’s banking system.

Through the Department of Supervision, and in accordance with the Financial Institutions Act of 1999, the Central Bank promotes the efficiency and effectiveness of the financial sector, ensuring the integrity of the financial system through proper licensing and supervision of financial institutions. The Bank conducts onsite examination and offsite surveillance to ensure adherence to the prudential requirements and proper functioning of the banking system.

In recognition of the need to develop and consistently review its programme for effective and efficient financial supervision, the Bank established the Financial Institutions Supervision Technical Committee (FISTC). The Committee plays an important advisory role with regard to supervisory issues. It comprises the Governor (as Chairman), Deputy Governors, Directors and senior officials of Supervision and Research Departments. The Committee meets once a week and is kept informed of all relevant supervisory activities.

The Central Bank executes external payments on behalf of the Government of Lesotho, and the commercial banks.

Under the Financial Markets Department, the Bank holds reserves with the objective of preserving the value of these reserves, providing liquidity to meet external payments for the Government, and earning a reasonable return on investments. The Bank is also responsible for executing the foreign exchange policy of Government.

The Central Bank provides several important services to the Government and the commercial banks. As the banker for the Government, the Bank clears cheques drawn on the Treasury’s account. It also acts as a fiscal agent for the Government through selling and redeeming of the Treasury Bills. In addition to provision of teller facilities to the Government and supplying of currency to commercial banks, the Central Bank operates a clearing house for participants in the clearing system. It further has the responsibility of ensuring an effective and efficient payment system. To this effect the Bank has had to review the National Payment System with the view to bring it in line with internationally accepted principles.

The Central Bank has the sole right to issue and manage the national currency. Through the commercial banks, it puts into circulation notes and coins for the public’s need for cash. The Bank also has the responsibility to regularly sort out notes that are no longer fit for circulation; to check for counterfeits and to replace mutilated notes. It also carries out repatriation of foreign currencies and retrieval of national currency, Maloti, from abroad.

6. Advisor to the Government on Financial and General Macroeconomic Matters

The Central Bank has a Research Department that is its technical arm. The Department monitors economic developments with a view to analysing economic policies, and recommending remedial measures as well as making macroeconomic analyses and forecasts. The performance of banking and other financial institutions is also reviewed and an analysis made of domestic and regional money and capital markets, as well as international economic prospects. 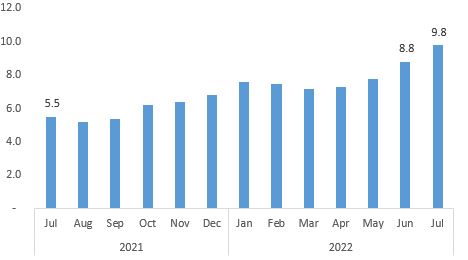